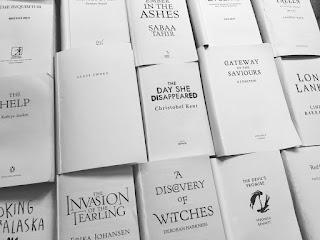 This book really does make you want to bolt your doors more than once and double check all the windows are closed.

Long Lankin is a spine chilling book perfect for those who enjoy dystopian novels - the change of narrator helps you understand the story from each character's perspective.

Lankin - The wronged mason which derives from the Scottish version of Lamkin.

Long Lankin is a folklore legend based on the wronged man that hides in the moss seeking innocent children to live and survive on - The backstory implies that Lankin was a leper who sought a witches advice to murder a young child and bathe in the blood of the innocent in order to help his 'leprosy'.

The author Lindsey Barraclough was able to stay along the lines of the folklore while still adding her own spin to it.

Teenager Cora and her little sister Mimi are sent to stay with their great aunt Ida at Guerdon Hall in Bryers Guerdon and are given a frosty welcome when they arrive to the point that they are begging to go back to London but all is not what it seems and Aunt Ida's frostiness has more behind it. Aunt Ida proves in the beginning how much she doesn't want the girls around and tries her hardest to get their dad to get them back but to no avail.
She indeed knows there is more going on 'beyond the marshes and the moss' and wants to protect them from 'Him'. Long Lankin. The man beyond the marshes.

The introduction is quite slow in regards to understanding the background and settings and takes a while to get into especially with a few of the riddles and rhymes that are spread through out the book making it all the more compelling. The characters are each unique and have their own separate personality which towards the middle helps when you've bonded with your favourite character.

Aunt Ida's slow character transformation from Ice queen to Soft mother nature is a transition the character needed and deserved. From the minute you turned the page, all you wanted was for Aunt Ida's frozen demeanour to change and for her to blossom into a mother figure for Cora and Mimi.

Cora is pretty bad ass and has a very rugged feel about her. She is the type of girl that doesn't take shit lying down and strikes up a friendship with two brothers Roger and Pete that live nearby; who already have their doubts and conspiracy theories when it comes to Guerdon Hall. Cora is very mature and takes on almost a mothering role with her little sister Mimi.

Mimi who we believe to be a child with an overactive imagination has an imaginary friend 'Miss Kitty' who in the end turns out to be a ghost of Guerdon hall that wants to warn her and her sister Cora to leave.

The constant ominous twists and strong details are what keep this story creepy, engaging and a favourite to keep on the must read shelf.

The sequel Mark of Cain also links to the Long Lankin tale and is a solid 8/10.

Behind the Door - A Gavazzoni.

A bit about Me.